TESTING THE MONTH-TURN EFFECT ON BRICS-T INDICATORS WITH THE GARCH (1,1) MODEL

With the development of stock exchanges, the most curious issue of investors has been whether they can earn above-average income and whether price movements can be predicted. The Efficient Markets Hypothesis (Fama), which took its place in the 1960s, is based on the basis that securities price movements reflect all the information reaching the market, that market participants are extremely logical, price movements exhibit "Random Walk" and cannot be predicted in advance. According to this view, investors cannot earn abnormal returns. However, studies and empirical findings have been found that contradict the assumptions put forward by the Efficient Markets Hypothesis, that contradict this hypothesis, and reveal that stocks achieve higher than normal returns at certain time intervals. These findings, which are incompatible with the Efficient Markets Hypothesis, are described as marketanomalies. Anomalies in the sense of deviation from normal reveal the probability of investors returning above average. It has been scientifically proven that in any month of the year, known as the lunar anomaly, a higher return is obtained at the end of the previous month and a few days at the beginning of that month compared to other days. In this context, the subject of the study has been determined as Testing the presence of the Lunar Rotation Effect in the BRICS-T Indicators with the Garch (1,1) Model. Working with Brazil, Russia, India, China, Turkey and South Africa (BRICS-T) indicators index in January 2005 and October 2018 period is intended to determine possible Month Anniversary of the anomaly. The GARCH (1,1) model was used to determine the anomaly, the positive or negative aspect of the effect, and the analysis of its continuity in the long and short term. According to the findings obtained as a result of the analysis, the possible existence of the Lunar Cycle Anomaly in BRICS-T countries was revealed, while the differences between countries were highlighted. In addition, while the effectiveness of the evaluated countries in weak form was tested under the Efficient Markets Hypothesis, additional information set was provided for market participants. 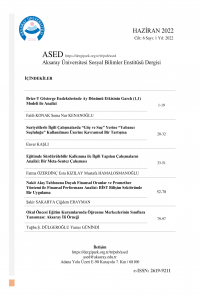