Yûnus Emre (1240? - 1321?), One of the first representatives of the Anatolian Sufism insti-tution, can clearly see the traces of Anatolian wisdom in his Risâletü'n-Nushiyye and Divan. He tried to meet the moral needs of the people, which did not lose its validity at that time and later, in the cleanest Turkish. He made sense of the being called "human" in the climate of Sufism. Yûnus sought the concept of "love", also known as "bird language", which is potentially present in the inner world of this being. This search has enabled him to become a guide for many dispo-sitions, sects and professionals after Yunus. Azîz Mahmud Hüdâyî, one of the most distinguis-hed figures of 16th century tekke-mysticism literature, is one of these people. His poems, which he mostly wrote with the divine verse genre, are in the style of Yûnus Emre. He used his poems, which he put forward with both prosody and syllabic meter, which make them feel fluent, simp-le and sincere, as a method of communication, and these poems found a wide range of readers from the public to the sultan. Some of his poems were also composed. Azîz Mahmud Hüdâyî's poems, which we can evaluate within the scope of Tekke-Sufism Literature, invited the people to the path of Sufism with sincere and simple verses that can be easily understood by the public. In his poems, the hymns in the style of Yûnus Emre, sometimes reminiscent of the nazire, im-mediately draw attention. In this article, we will try to reveal the influence of Yûnus Emre on Azîz Mahmud Hüdâyî in terms of style and content. In this way, the 16th century representative of Sufiyane poetry, which flows like a river with the wisdom of Ahmed Yesevi in Central Asia and continues with Yunus Emre, who is the first and most powerful representative in Anatolia. 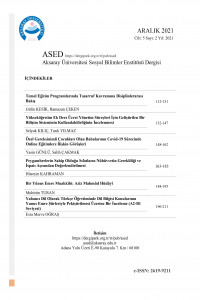