During the last period of the Ottoman Empire, there were many problems caused by the deterioration of the economy and the lost wars. II. In the process after the declaration of legitimacy, some of the decisions taken by the Ottoman government and its compensation were very destructive for the state and the nation. In the face of material and spiritual difficulties, the Turkish nation preferred sacrifice rather than rebellion. Between 1911 and 1922, the nation was forced to fight. The Turks sacrificed everything they had for their states (primarily the army). Apart from the soldiers who run from front to front with their blood and life, there is also the support of the people. This support is very important, because the soldier's clothing, food, weapons, ammunition, etc.could be supplied thanks to the state and the nation. Although it was located in the middle of Anatolia, far from the enemy occupation, the Aksarayians also provided possible assistance for their state (army, military). In difficult times, they have tried as hard as they can to be a salve to the wound of the state and the nation. In a study entitled” definitions of the benevolence of aksarayians (1909-1931) " II. About twenty-two years between the first years of legitimacy and the Republic, aid was tried to be determined. II. In relation to the period of legitimacy, newspapers published in Konya were applied. Because Aksaray administrative division 19. from the middle of the century to 1920, it was part of the Sanjak of Niğde, Konya province. Newspapers and magazines are not available in Aksaray, nor are they available in Niğde. For this reason, periodicals only exist in the province. Konya Vilayet newspaper, Babalık newspaper are important sources. Aksaray, which was a province during the Republican period, started publication of the “Aksaray Province newspaper” in 1926. For Aksaray's assistance to the army and other places, the newspapers mentioned and the documents found in the State Archive were scanned. Aksarayians 'assistance to the Army during and after the Balkan wars, as every member of the Turkish nation, who created a new state from the wreckage of the defeated, separated and occupied Ottoman state from the First World War, does, Aksarayians' assistance to the army. It can be said that Şereflikoçhisar, which was Aksaray's district between 1920 and 1933, was very generous for tayare, which is one of the most important needs of the army. 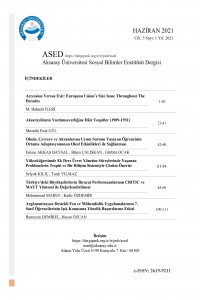